Last week, Microsoft's Eric Hautala shared some information regarding the Microsoft Windows Phone 7 update known as 'Copy and Paste' or 'March 2011 update' over on the Windows Phone Blog. Earlier this week, WPcentral picked up some news that I shared with customers via Twitter.

Some helpful tips when installing a fresh copy of Windows on a Dell Venue 8 Pro along with doing os update and PC reset. Remove your SD card to prevent freez.

Know several of you have been waiting on this post, so here's what I've got to share:

To be clear, there are technically 3 updates that apply to Dell Venue Pro customers. The February update and the Cut and Paste update are coming from Microsoft. The Cut and Paste update requires you to have the February update installed on your phone. The third update is the Dell one I mentioned. I'll blog about that one later. According to an update to Eric's post I mentioned earlier, here's how he explains it:

Some of you might actually get two update notices on your phone in the weeks ahead (if you see 'Delivering update' in both status columns). The first notification you'll get is for the February update. After you've installed it, you'll receive a second notification for the 'copy and paste' update. I've already started seeing a few questions about the timing of these in blogs and forums. Because of how our process works, these two updates most likely won't arrive back to back, but days or even a week or two apart. You can learn more from this support article.

Like Eric mentioned in his post, Microsoft is delivering the Copy and Paste update in batches. That's why it's not getting to all of you at once. Regarding the subsequent Dell update I mentioned above, I don't have details or timing to share on the Dell update at this time, but I will blog about it on Direct2Dell when that changes.

So what can you expect from the Microsoft March update? As most of you know, Copy and Paste is one; faster app speed and gaming load times is another. Tweaks to the Marketplace, Outlook, and more. Take a look at this list from Microsoft (under the March 2011 section to get a better idea of what I'm talking about).

The update process requires Microsoft's Zune software. One note: I had already installed the February update on my Venue Pro. In other words, I went from Microsoft update #1 to Microsoft update #2. I was able to go through this process last night, so let me take you through the steps to install the Copy and Paste update: 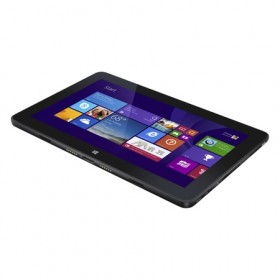 After installing the update, I tried a few apps. Seemed faster overall…. Netflix load and movie playback times were quicker. Apps I use a lot like Twitter and Facebook seemed snappier. Some other folks have said positive things about the speed improvements on game load times. I don't have any games on my Venue Pro. Any recommendations on good ones?

I know there are some other issues that many of you are asking me to address. Like I mentioned, I’ll blog more about the upcoming Dell update in the future.

Thanks for your patience. If you have any questions about this process or Microsoft’s Windows Phone 7 update, drop me a comment below.

Today I decided to repave my Dell Venue 8 Pro with the latest Windows 10 Preview build (10162). I've been running Windows 10 on the device for a very long time, starting with an upgrade from Windows 8.1. Unfortunately, along the way, updates began to fail. Such is the risk of a preview OS.
The installation turned out to be pretty easy.
As most projects go, the prep is the most important step. First, make sure that the device is fully charged. I swear the thing doesn't change when it's running. Maybe it's just my device. Maybe I'm imagining it.

While the device is charging, download the 32bit version of the ISO from the Windows Insider site and burn it to a USB drive. I used isotousb. Format the USB drive for FAT32 and make sure that you click the option to create a bootable drive. Oh! Don't forget to grab the activation keys.
You're also going to need some drivers. You can get them from the Dell Venue 8 Pro Product Support page. I ended up using:

There's also an update for the touch screen (Panel Touch Firmware for Dell Venue 8 Pro 5830) but the installer notified me that the touch driver was already up to date after I had installed the Intel Atom A3000 Series Driver. YMMV.
I created a folder on the USB drive and copied all the installers to it.
Then you're going to need a USB hub.Windows 10 didn't come with a driver for the touch screen so you're going to need a mouse. The hub will allow you to have both the USB drive and mouse connected at the same time. You might also need an adapter (like this one) to connect the hub to the micro USB on the Venue 8.

With the device turned off, connect the USB hub to it. Press the Volume Down button and power on the device. It'll seem like the boot stalls until you release the Volume Down button. Then the device will boot into the BIOS setup. Navigate to the BOOT tab. You should see both the internal drive and the USB drive showing as bootable drives. Change the first boot target to the USB drive then save the changes and let the device restart. If all went well, the Windows 10 installer should start.
I chose the Custom Install option and removed all the existing partitions.

After the installer completed, I installed the drivers in the same order that I listed them above.

One note: the only operating difference that I've noticed is that I have to hold down the power button for a couple of seconds to power on the device. Otherwise, everything else seems to be working as expected.
New Posts